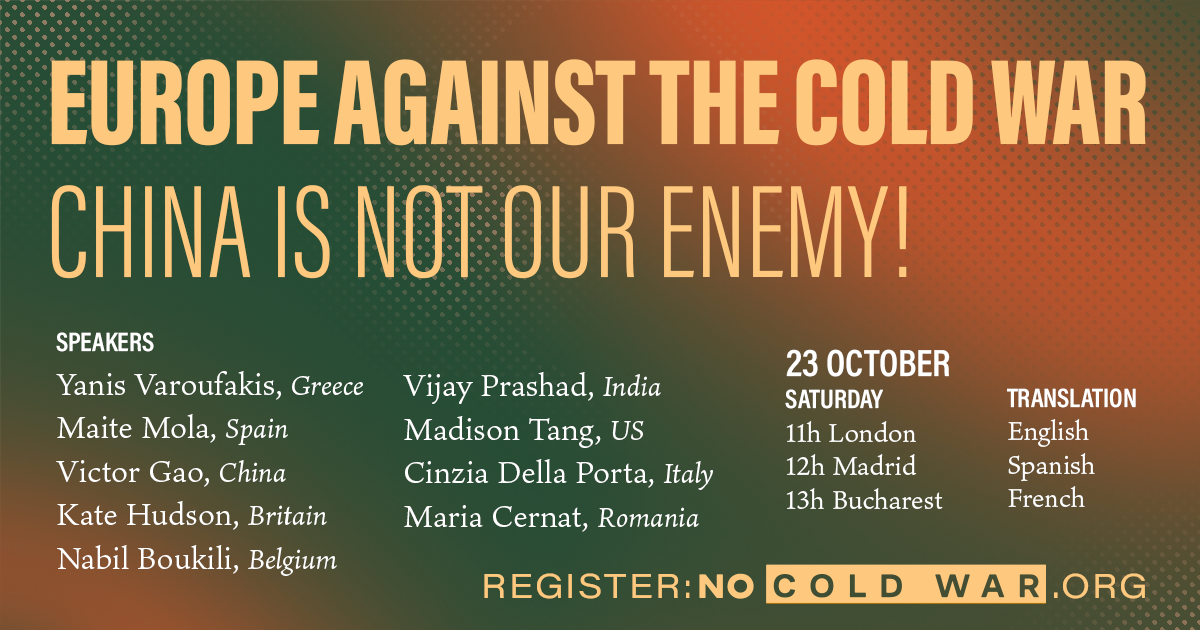 Join No Cold War’s next online event Europe Against the Cold War – China is Not Our Enemy!

No Cold War brings together 9 speakers from different countries to discuss why the new US-led cold war against China is against the interests of humanity and why Europe should not go along with this aggression.

The most recent summits of both the G7 and NATO in June 2021 unfortunately saw a number European governments accede to the new cold war agenda advanced by US President Joe Biden. The NATO Summit’s communiqué identified China’s rise as a “systemic challenge” and a security threat to the Western military alliance.

The announcement in September that Britain has formed a new anti-China military alliance alongside Australia and the US – AUKUS – represents a further serious escalation of this new cold war against China. This year has also witnessed Britain, France and Germany engaging in provocative and aggressive military gestures by sending warships to the South China Sea.

Meanwhile the US has also been attempting to prevent the signing of the EU-China Comprehensive Agreement on Investment, a major agreement to strengthen economic cooperation between the EU and China.

As the new cold war heats up, China is being increasingly demonised in the mainstream media in both the US and Europe, leading to an alarming rise in anti-China racism and hate crimes directed against people of East and South-East Asian heritage.

On the economic front, for Europe to join in with the US administration’s offensive against China, which is designed to hold back China’s economic development, would be an act of economic self-harm. China is already a major trading partner of most European countries. Any country that follows Washington’s cold war approach will suffer economic damage – losing jobs, trade, investment and access to advanced technologies.

Instead of adopting such cold war positions, what is required is international cooperation to tackle the real threats and problems facing all of humanity. These include defeating the on-going Covid19 pandemic, building an economic recovery and taking the urgent action needed to stop impending climate breakdown. All of these problems require genuine global cooperation to tackle and the new cold war against China represents a real distraction and serious obstacle to solving them.

The biggest threat of all is that the US-led new cold war escalates into a deadly hot war against China – which has the potential to be nothing less than a total catastrophe for all of humanity.

Join the online event! Let’s mobilize Europe against this dangerous threat to world peace and prosperity!