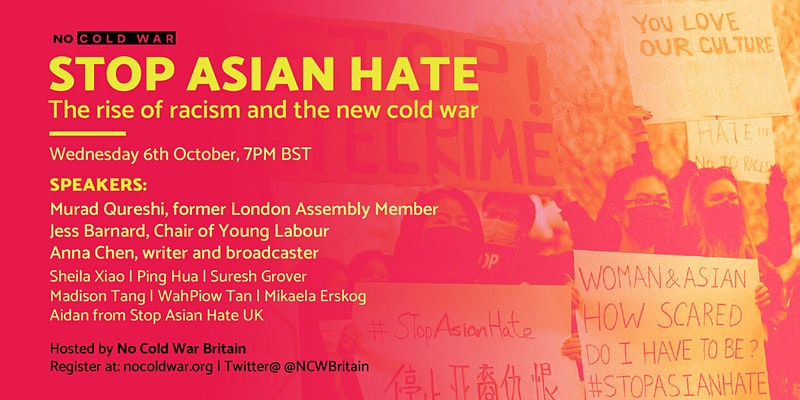 Join No Cold War Britain’s online rally opposing the rise of racism that is being fuelled by the US-led cold war on China.

Join a range of speakers from the Chinese, East Asian and South East Asian diaspora, prominent labour movement figures and representatives of from youth, anti-racist and anti-war organisations in Britain and the US to discuss why we must build the #StopAsianHate movement in Britain and internationally.

This event comes in the wake of an alarming rise of racist hate crime against people of East and South East Asian heritage in the US and Britain and at a time when the US and close allies including Britain are increasing aggression against China in pursuit of a new cold war.

Follow @NCWBritain for updates about this event and other upcoming initiatives.

Who are the organisers? This event is hosted by No Cold War Britain, the British section of the No Cold War international campaign.

How do I find out more about this issue? You can visit the NoColdWar.org website and follow @NCWBritain @NoColdWar on social media for more information.