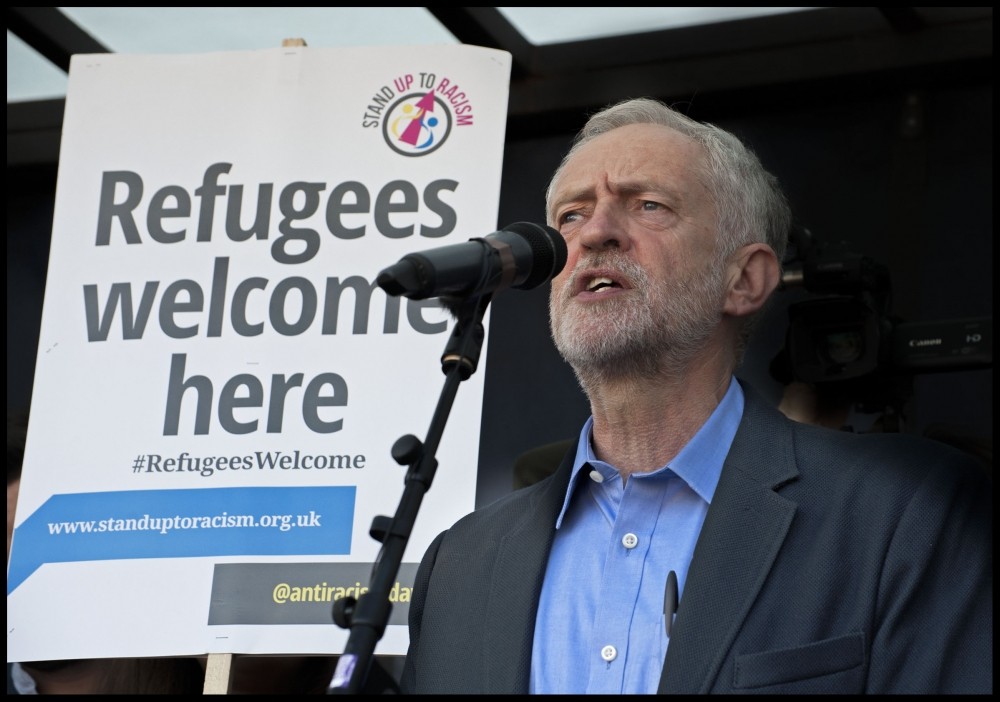 Jeremy Corbyn MP, the former leader of the Labour Party, has put out a strong statement opposing AUKUS and the threat of a new cold war and danger to world peace that it represents. Reproduced from Labour Outlook.

Since its announcement last week, AUKUS has faced growing international opposition, including from Governments often closely allied with the US, UK and Australia on the global stage, with France ending its contract to supply submarines to Australia.

It has also been met with incredulity from peace and disarmament groups across the world.

AUKUS is a major new military alliance that makes Australia the key US ally in the region.

The agreement includes cyber warfare, artificial intelligence, and underwater capabilities, as well as long-range strike capabilities. In terms of nuclear weapons, AUKUS includes plans to set up an Australian nuclear powered submarine fleet, brokered with the US and Britain.

This is a dangerous development. Australia’s neighbour, New Zealand, is not participating in the pact, but is also clear that its “no nuclear” policy means that any Australian nuclear-powered submarines will be barred from its ports and waters.

Clearly explaining the position, New Zealand’s Labour Prime Minister Jacinda Ardern said “all partners are well versed and very clear on our position on nuclear powered vessels and also nuclear weapons. Our legislation means no vessels that are partially or fully powered by nuclear energy is able to enter our internal borders.”

Earlier this year, the Tories committed to spending £24 billion on defence including even more resources on an expanded nuclear weapons arsenal of up to 260 warheads, against our obligations under the Non-Proliferation Treaty (NPT.)

Now they are breaking this treaty again by supplying weapons-grade uranium to Australia.

Kate Hudson of CND has said, “This is yet another breach of international law by our government, hard on the heels of the nuclear arsenal increase.”

The cost is enormous. There is unlimited money for weapons of mass destruction, yet at the same time the Government claims it can’t afford to keep the £20 uplift to Universal Credit or give nurses a decent pay rise.

Boris Johnson formally denies that Britain is part of a new Cold War with China, yet it is more and more commonly accepted internationally that the UK is the US’ major follower in pushing more hostile relations with China, despite the obvious danger of a cold war becoming an actual war – or series of proxy conflicts – in the future.

In fact, it seems the Government is the most hawkish component of the new alliance – a Stop the War Coalition press release has noted that “US officials have briefed that the UK government has been pushing hard for strong military involvement in the region as part of its push towards ‘Global Britain.’”

After Biden’s withdrawal from Afghanistan and recent speeches, it was hoped by many that the end of the “war on terror” and its policy of regime change under the guise of “humanitarian intervention” would mean a new push for diplomacy and co-operation, but instead the fear is that resources will be re-directed to a military build-up in Oceania.

In 2020 the US spent more on “defence” than the next 11 countries combined, and a real test of Biden’s Presidency will be if he substantially cuts this spending rather than re-directs it.

In Australia opposition is growing, with former Labour Prime Minister Kevin Rudd asked for clarity on whether the new submarines could be deployed in the midst of a conflict with China in the Pacific, as well as expressing grave concerns regarding Australia’s own nuclear NPT commitments.

Another former Prime Minister, Paul Keating, said AUKUS is a “further dramatic loss of Australian sovereignty” and warned that “if the United States military with all its might could not beat a bunch of Taliban rebels with AK47 rifles in pickup trucks, what chance would it have in a full-blown war against China, not only the biggest state in the world but the commander and occupant of the largest land mass in Asia?”

His concerns reflect the fact that Australia will now be dependent on American technology and know-how to maintain these submarines, in the same way that the UK is totally dependent on the US for “our” Trident nuclear weapons system.

In terms of Britain meanwhile, it is vital that we build up the opposition to AUKUS.

Particularly dangerous is that Boris Johnson seems to be hawking back to the days of Empire, turning back from the decision originally implemented under Harold Wilson’s Government to pull British troops from “east of Suez,” in recognition of the fading role of the empire. It’s astonishing that nearly 50 years later Boris Johnson is turning the clock back for reasons that can only be political.

In contrast to the Tory Government’s approach, the whole labour movement and all progressives must make the case clearly that real security will come from international co-operation to tackle the global crises of our time.

In particular, the massive resources being put into the new nuclear arms race could be put to use to tackle climate change, where the UK, US and Australia are three of the Governments that most need to put far more serious levels of resources into green stimulus at home and helping green development internationally.

Whether it be the deepening climate catastrophe, the Coronavirus pandemic which is still raging across the globe, the refugee crises across the world, or the horrendous levels of inequality and poverty that scar humanity, these common challenges can only be met by international co-operation and constructive engagement. Investing in clean water, sanitation, education and healthcare should be our priorities for a safer world.

Whatever the rhetoric of the new cold war warriors, this is the approach that can bring peace, justice and human rights to the world.