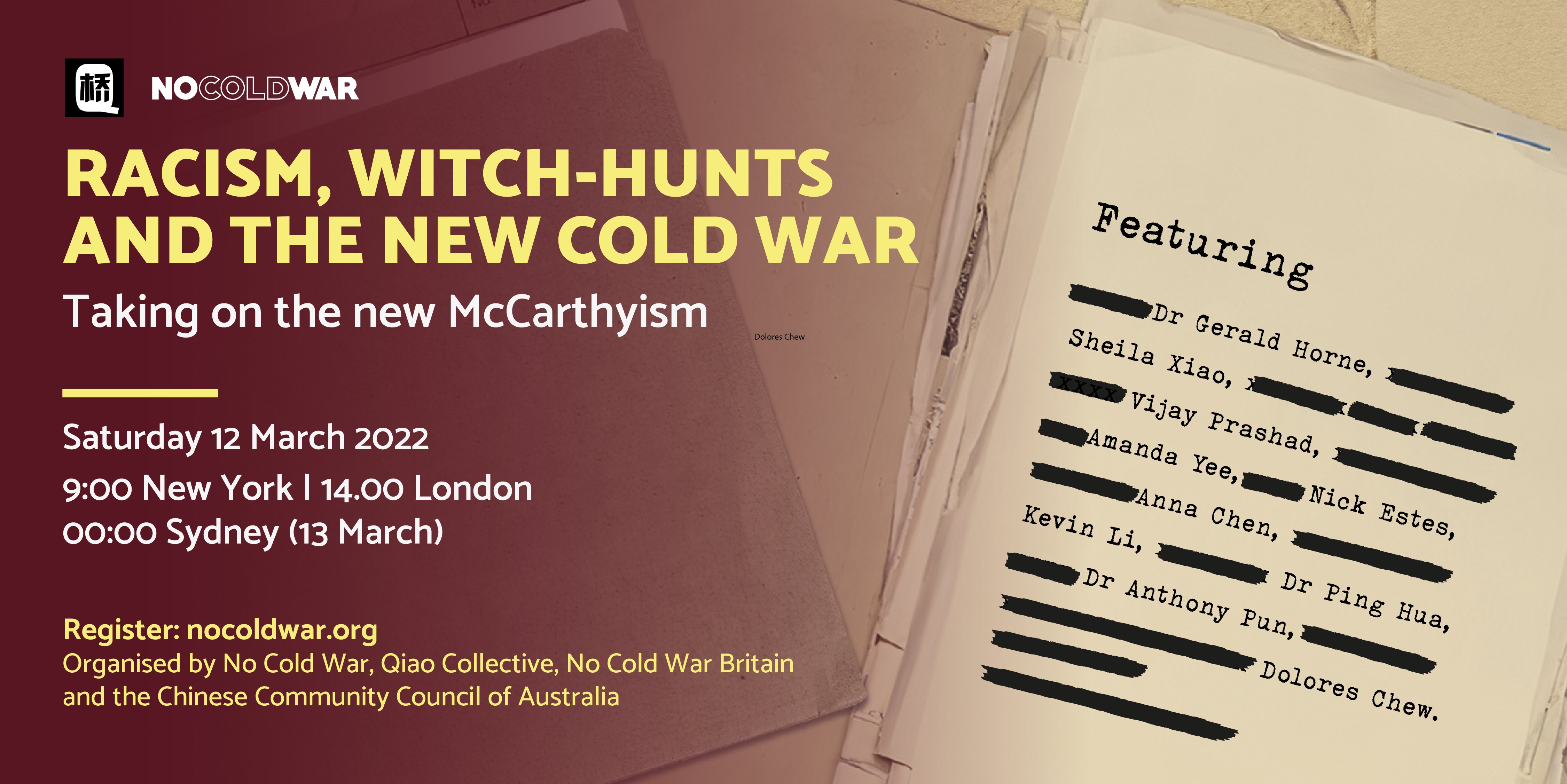 Register for ‘Racism, Witch-hunts and the New Cold War: taking on the new McCarthyism’ here.

This event is organised by No Cold War, Qiao Collective, No Cold War Britain and the Chinese Community Council of Australia.

The first casualty in war, hot or cold, is the truth.

As the New Cold War against China escalates, the United States political establishment and its allies are intensifying their efforts to restrict discussion on the international political situation, invoking anti-Chinese racist rhetoric and targeted smear campaigns.

This dangerous agenda seeks to justify an aggressive foreign policy towards China and is having a chilling effect on the political climate within the United States and allied countries such as Britain, Australia, and Canada.

Politicians and the mainstream media demonise China in an attempt to justify the New Cold War. McCarthyite witch-hunts are being launched against individuals for merely questioning or criticizing their government’s foreign policy. Especially concerning is the sharp increase of hate crimes and attacks against people of Chinese and East and Southeast Asian heritage in the West. It is clear that the propaganda war against China is directly fuelling this rise in racism and creating a climate in which Asian diaspora communities are being increasingly treated as “enemies within.”

This repressive environment is not merely a threat to democracy, it also increases the likelihood of dangerous and destructive foreign policy choices by shutting down debate. During the 20th century, McCarthyism prevented robust and objective discussions from taking place in the US about its Cold War foreign policy. This confining approach contributed to disastrous and criminal US policy decisions such as the Vietnam War. A similar atmosphere of fear and racism helped pave the way for the illegal invasion of Iraq in 2003.

Instead of adopting these Cold War, ideologically-charged, and alarmist approaches, we must create an open environment which fosters fact-based discussion and dialogue. Racism, witch-hunts, and censorious attacks on free speech are not only reprehensible, but also an obstacle to the global cooperation necessary to resolve the serious problems that the world faces.

On Saturday 12 March, join No Cold War for an international webinar featuring a range of scholars, experts and members of the international Chinese diaspora who will discuss why it is vital to oppose the rise in racism and witch-hunts and build the broadest opposition to the New Cold War.